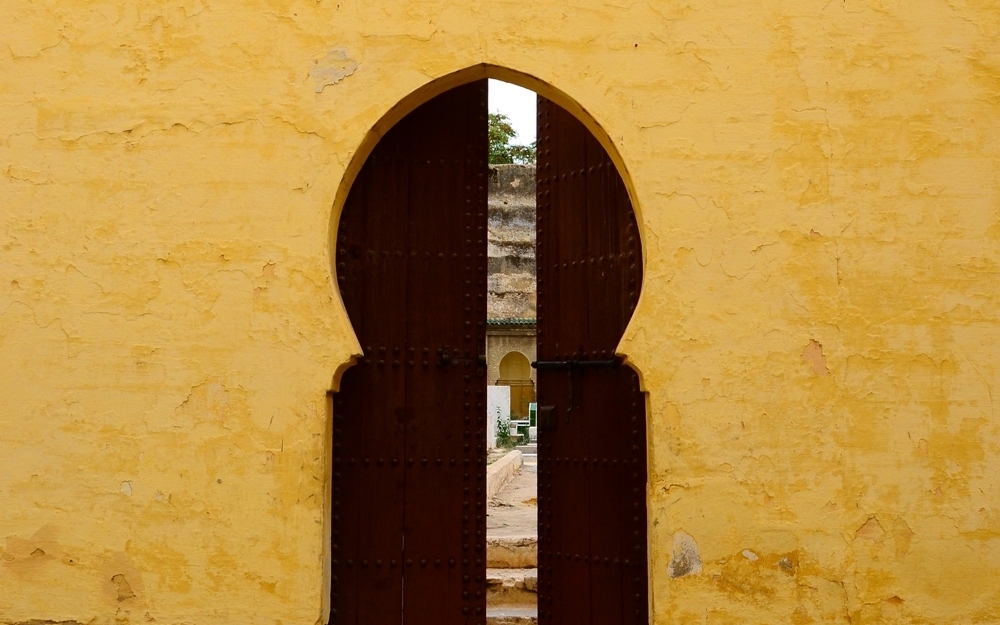 ‘Smart cities’ are all fine and good for life’s necessary conveniences, with their state-of-the art parking tech lighting your way to vacancies, conveyer belts that kick in when they see you coming, always-on wifi, and other technological perks that keep us moving, switched on, and wired for daily life.

If at times smart cities represent ‘digital overload’, then surely passing through an ancient archway to a tranquil space must be its antithesis – that civic digital de-tox we don’t usually attain unless resolutely electing to break the circuit, leave the city and ‘go bush’.

The word ‘privacy’ derives from the Latin privatus, meaning separation between the communal (household) and public spheres.  It later came to signify the separation of personal (individual) and public.

The development of privacy as a human interest or psychological construct mirrors the significant cultural shifts societies experienced moving from the Renaissance period, to the Age of Enlightenment.  Enlightenment witnessed further exploration of science and nature, new think tanks, and the rise of the novel – with increasing numbers of those who could read and write moving away from traditional ecclesiastical content, to exploration of individual discoveries, plights, travel, and other human experience.  These were stories of individual identity, reflection and self-determination.  And thus, the concept of privacy as a form of individual identity arose.

Sociologists observe that on a macro level, in the western world, we also moved from a collectivist ‘shame culture’ in which our identity and reason for being was to be found in our group or tribe, to an individualist, ‘guilt culture’, in which we became members of a nuclear family unit – identifying for the first time as truly separate from extended kin.  The concept of ‘self’ differs dramatically in each.  In a ‘shame culture’, individual actions either bring honour to the family or ‘shame it’.  In a ‘guilt culture’, you ought to be either be proud of your personal achievement, or ashamed of yourself.  Identity (and life choices) are also more pluralistic – some have said, making us more prone to identity crises, career flips and other sea changes, at different points in life.

With rising standards of living, and an ability to alienate other nuclear families from property, we sought to keep up with the Joneses, hiding dirty laundry from those outside our nucleus.  This significant cultural shift bore out in architectural design.

House design changed from single-room (i.e. open plan living) feudal thatched roofs, to rooms separated by corridors and quarters – building more impressive drawing rooms to the front, and shifting sculleries to the back.  In Europe and England, we first saw hallways built for passage to private rooms and chambers, and proper stairways to those hallways emerge around the late 17th century, and then become widely used from the 19th century.

The pendulum of time still swings back and forth in domestic spaces – bringing solitude and reprieve, or ‘family time’.  In the post-WW2 ‘west’, we saw a return to those open-plan living spaces (thankfully without thatched roofs and dirt floors), making the kitchen, for the first time, a central hub of collaboration and control. Our kitchens were encircled with a bar so friends and family could engage in natter whilst meals were being prepared.  How else could women have been encouraged to step back into full time domestic duties when men folk returned from war and needed their jobs back?

And then there are those funny ‘throwbacks’ in architectural design.  You tend to notice them when travelling as physical travel alters (sometimes strengthens) your sense of self and ‘other’.  I used to wonder, for example, why so many Amsterdam homes have big, curtainless bay windows to display thoughtfully positioned knickknacks?  My Dutch friends tell me this is a cultural hang-over sourced in Amsterdam’s 15th century mercantile history.  If ever there was a society that could successfully mix work and pleasure, it would be the Dutch.  Most Amsterdam households were trading households and maximising opportunity for trade within the local community was the foundation for prosperous family and social life.  Any wares to be offered for trade would be left in the bare window of each home, for purchase at any time of day or night.

The above is of course a very rough and blunt dichotomy between individualism and collectivism.  And just as globalisation and immigration have significantly blended these two cultural concepts, so too do we see this blending in architectural design – the Spanish Mission home, the French Façade, the quiet Japanese courtyard.

We see key differences within cities, between quarters, or from one building to the next.  In Marrakech, for example, the outward-facing balconies and large windows in the Jewish quarter are markedly different to the surrounding Islamic architecture, where homes feature lavishly decorated, peaceful and plant abundant internal courtyards, but offer little decoration or display of wealth (or even windows) on the outside.  And there are still nuances between cultures in how we conceive personal space, as evidenced by Vic Groskop in ‘Personal Distance – why Russian life has no room for privacy’.

Other aspects of design that enhance personal privacy include the use of fountains in parks to provide enough noise for ‘acoustic privacy’, or that special breed of Lilly Pilly, the ‘neighbours be gone’ tree or ‘spite hedge’.

However design can also be used to deliberately erode privacy.  A privacy advocate once observed that in her home country, Soviet-era Czechoslovakia, the walls of houses were built deliberately thin so that neighbours could spy on each other, as a form of social control.

In her article, “Nothing to hide – What happened to privacy?” novelist Linda Jaivin observes that the idea behind the Separate Prison at Port Arthur in Tasmania, one of the first supervised prisons, or panopticons, was that if inmates thought they were being watched at all times, they would reform themselves and become better people.  In reality, at Port Arthur as elsewhere, it more often drove them to madness.

Margaret Attwood, in her review of Dave Eggers’ novel, The Circle, noted: “What happens to us if we must be ‘on’ all the time? Then we’re in the 24-hour glare of the supervised prison. To live entirely in public is a form of solitary confinement.”

Sometimes change hits you like a tonne of bricks. That was the experience I recall when I stepped into a classroom as a parent for the first time some years ago, having not been in one since the 80s.  Gone are the days of front facing rows or desks.  They are collaboration spaces, with tables in groups reflecting more modern teaching principles.  Gone are the days of being scolded for not keeping your eyes on your own work.  Group work is now so much more valued.  ‘Show and tell’, reconceived as ‘Show and share’.  Students are expected to be sociable.

Classrooms open and unfold like pop-up books creating new, flexible learning spaces.  As with open plan workplaces and hot desks, this makes for a much noisier, unsettling environment.  A well-designed classroom will have a quiet corner, equipped with noise-cancelling headphones.

Libraries too are designed with private study areas and small conference rooms, but there is a counter argument to this – that libraries are no longer a source of silence but an escape from it.  As writer Fleur Morrison reflects,

“in this age of voiceless communication via Facebook, Twitter and Snapchat, I have a suspicion that it is not silence most people are missing, but chatter. We have silence when we gaze at our iPhones on public transport, as we order groceries online and as we call customer service and receive an automated response. Libraries no longer need to be an escape from conversation. Now they are sources of that very noise that they used to forbid”.

What does the future hold for privacy in public spaces?

History repeats itself in odd ways.  When the ‘west’ moved from a shame culture to a guilt culture, we privatised punishment, in the sense that we ceased flogging people in the public square and putting them in the stocks in front of an audience.  Now, it’s posited that Google and Facebook have re-conceived and re-opened the public square.  Our soap boxes and traditional billboards are now online posts and collaborative forums.  Demonstrations of the power of snake oil need only be advertised through targeted, algorithmic-based marketing.

Amnesty International argues that Google and Facebook have built the world’s new digital “public square”, but on their own terms, meaning that surveillance of us in that public square is ubiquitous, and incompatible with our human rights and core values of dignity, autonomy, and privacy.

Clearly increased housing density in areas of population growth, new technology, and environmental changes will be the largest of influences on architectural design.  We may see smaller living quarters and changing dimensions to public space.  There will likely be further commodification of public spaces, necessitating another balancing of vested interests over both public and privatised space.

In “Why the Opera House backlash was so fierce”, Waleed Aly gives a well-summarised account of public reaction to these issues:

“these symbols are vaguely sacred because they are in some respect civic. They are special because when they bring us together, they bind us as citizens rather than consumers. This is what makes them public spaces in the fullest sense. They immediately connect us to those who surround us either physically, or by some social or national mythology.  And so they are places we visit and experience for their own sake, on their own terms, and to be with our society rather than ourselves… Without public spaces – without public forums – eventually there can be no public.”

It’s ironic to think that by coming together in truly ‘public’ spaces, unmediated by the technology giants, we can enjoy more freedom and privacy than we do at home in front of our screens.